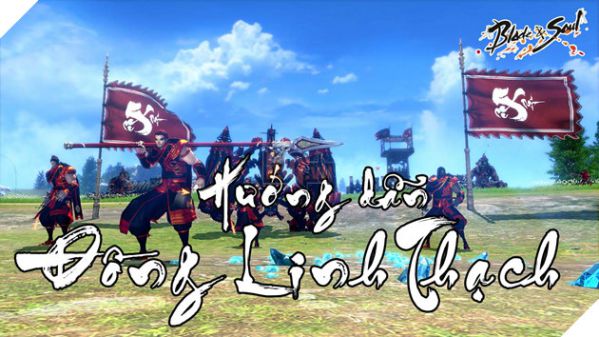 The following Game of Fun will guide players on how to operate as well as quests in Dong Linh Thach in the online survival game Blade & Soul so that players can have a more wonderful experience.

Overview of the Dong Linh Thach area in Blade & Soul

Dong Linh Thach is a factional war zone located in the center of Phong Chi Plain at Bac Suong Mountain. Here, the camps of the two factions Thien Thanh and the Blood Tribe will be located on two opposite sides, with the middle area being 2 drilling machines to exploit spirit stones for each faction if they win. 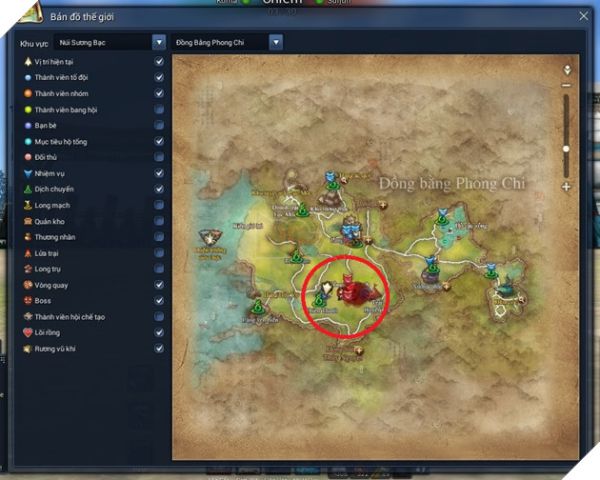 You can simply run into this area or teleport directly into the camp – as long as you’re wearing a faction uniform. Once in uniform, you will find a variety of daily quests on either side.

– If you don’t wear faction clothing, entering camp will be beaten by all NPCs if you see you.
– When wearing clothes, the opponent will be attacked by the opposing side: Both NPCs and other players
– While accumulating a Spirit point, using Esc> Escape will lose all of the points of the Spirit you already have
– Death will also lose the Spirit points in the hand of the person who kills you. Conversely, if you kill an opponent, you will receive his Spirit points.
– Spirit Points can be exchanged for experience upgrading faction ranks, or used to buy certain items in the shop.

Note: The mission is just to introduce in advance what you need to do here. Everything will be clearer after the mechanism below.

At the 3 beautiful girls who receive / return quests, you will have a total of the following common quests: 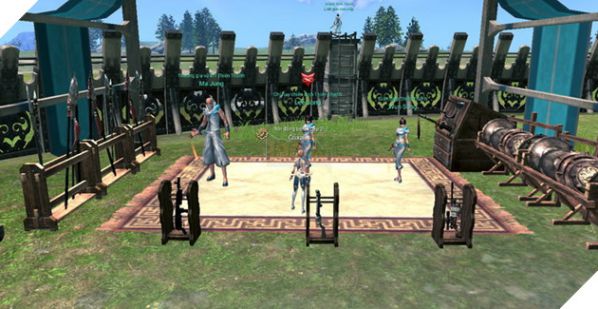 Defeat 8 elite Warriors, the Guard Warrior and the Opposition Guard Deputy.
These small units of soldiers will be scattered in the area on the edge of the opposition side. Each unit will have about 88k – 130k health, you just need to dodge the big boss to fight each one in turn. 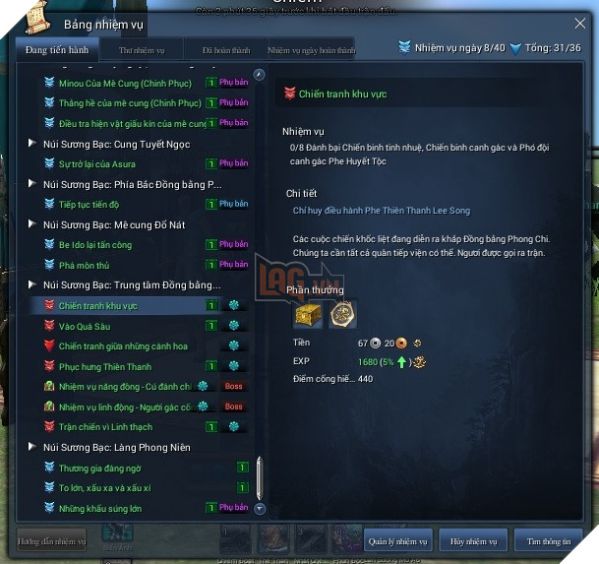 Defeat King Sharp Teeth and receive earth tears from it.
King Grinding Tooth (Boar) will appear near the end of the quarry. In addition, Heo will only appear while the drill robot is still alive, and you need to hit at least 3% of its health to receive tears and complete the mission. 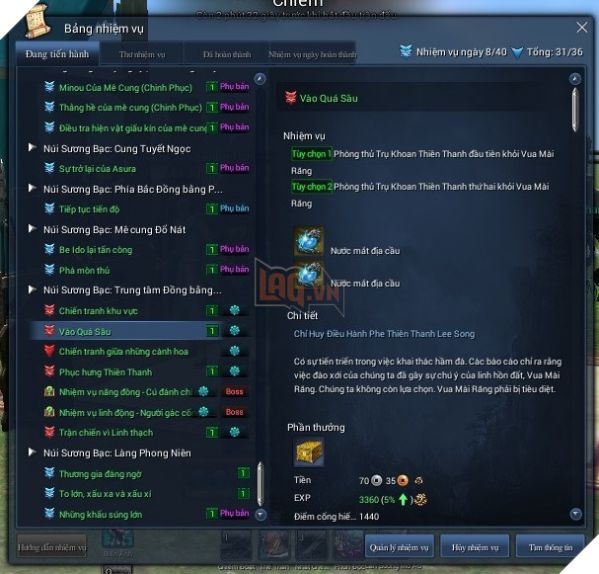 Pick up the soul piece of the pioneer engineer and leader
During the opposition’s quarrying phase, you need to destroy both defending mini bosses on both drills to pick up both of their soul guards. After that, the vanguard will appear and you need to destroy him as well to complete this quest. 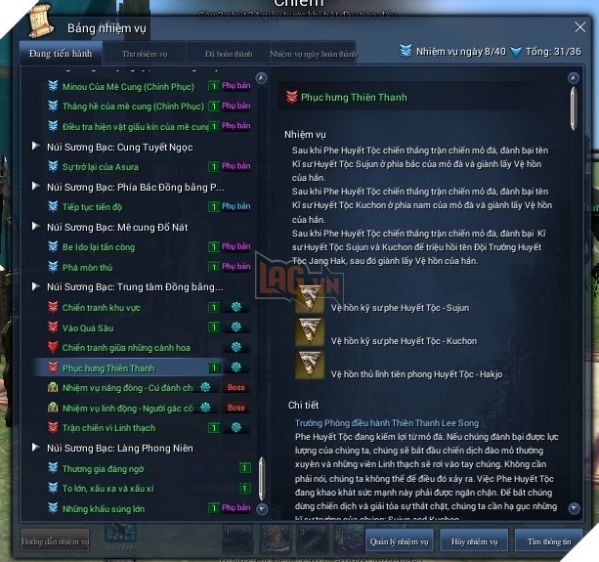 The battle for Linh Thach

Kill 6 mini boss pigs and 3 mini boss monkeys during the rock mining defense at the drill.
During the exploitation of their side, the opposition will start sending troops to attack these two drill areas, including mini boss pigs and big monkeys. You need to kill the required amount (3% health each) to get the box and complete the quest. 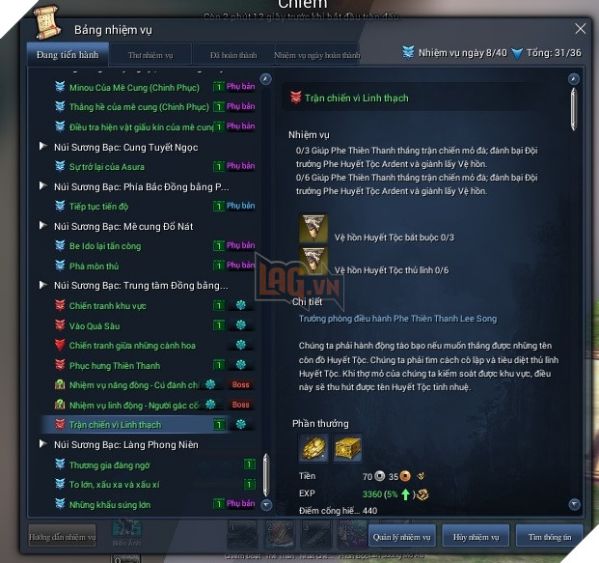 Overview of the working mechanism of Dong Linh Thach

Both sides sent soldiers to fight to gain control of the two drills and exploit the spirit for their own side. Players from both sides are required to join the fight otherwise nothing will happen between both sides.

There will be 11 minutes of preparation before the Takeover phase begins. During this time nothing will happen – but after that, the two sides will scold the drama a bit and send soldiers to the center for possession.
The Occupation Stage will last 12 minutes. Both sides will have the same number of troops – with the boss being the Mage of 6tr4 health, immune to all control abilities. Next to it are 2 small soldiers with a robot with 2 million of blood.
Your main task will be just to destroy the main boss (buffalo robot just needs the tanker to pull it away). After the defeat is complete, soldiers on both sides will retreat inside to prepare for the Mining phase for the victorious side.
If you deal more than 1% health, you will receive a bonus box dropped from the boss. If you last hit the boss, you will be rewarded with 1 more box. If the boss is pulled too far (through the territory of the soldiers on the other side), it will reset the blood back to the old place.
If no one interfered in this battle, both sides would retreat and return to the 11-minute preparation time.
Phase 2: Exploiting

There will be 1 minute of preparation between Capture and Exploit. The Mining Phase will last up to 33 minutes.
If either side wins the previous Takeover (kills the boss successfully), it will control the battlefield during this phase. 2 The Engineer of the winning faction will guard the North and South drill (each boss 6 million more health) with a few small soldiers + mining robot.
The task of the winner will be to defend against both the NPC and the enemy players during this period, and the losing side’s task will be to destroy both defensive bosses here.
There will be 3 main attacks, each consisting of 4 groups of “small” soldiers attacking at the same time 2 drills. These 4 groups of soldiers will have the order of appearing like chewing in all 3 attacks as follows:

In phase 2, if 1 of 2 engineers survives from start to finish then that side will win, if both engineers are destroyed, the attacker side will win.
Here, both sides will swear at each other again and pull soldiers out to fight the final wave. Phase 3 will last 17 minutes.
In this phase, we will have 2 cases:

Other side quests in Dong Linh Thach

This quest can be started when you purchase a quest book for 25 Spirit Weapons from the shop (book called Command of Clans xx). After that, you just need to pick up flowers located on the North and South edges of the battlefield. 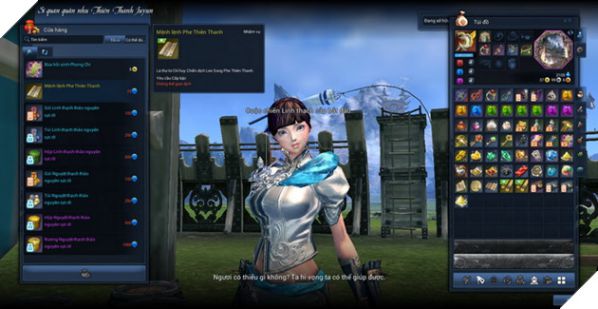 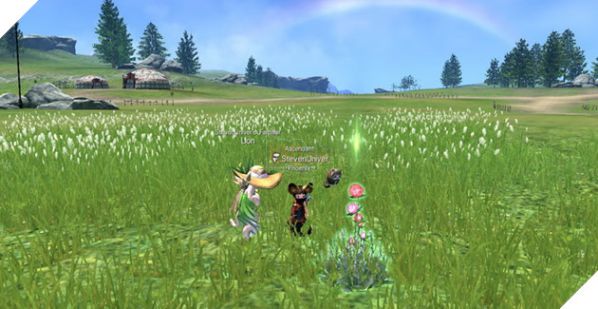 This quest can be obtained from books dropped from the enemy faction’s high level large monsters, mostly in the Mining stage (boss pigs and monkeys).
Next, you need to run straight to the side of the enemy barracks and jump inside. You can take advantage of the low areas of the fence and run fast – jump in it (spam Space to let the character jump in), or find a nearby tree to run straight up and slide into the barracks. Note the arrow-firing soldiers scattered nearby, just fly in the middle of those two to not get shot. 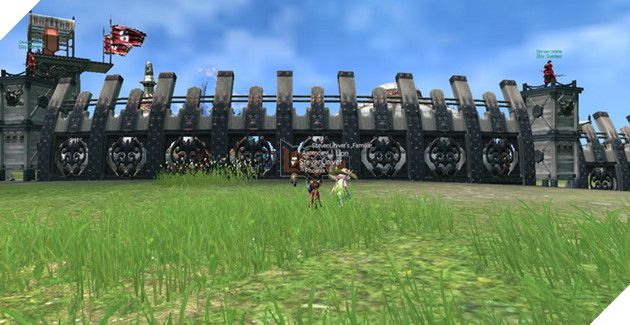 In the main tent located in the middle of the barracks (there are 3 soldiers going in and out of the door guard), you stand on the roof of the tent waiting for 3 soldiers to go away and then jump into the camp. 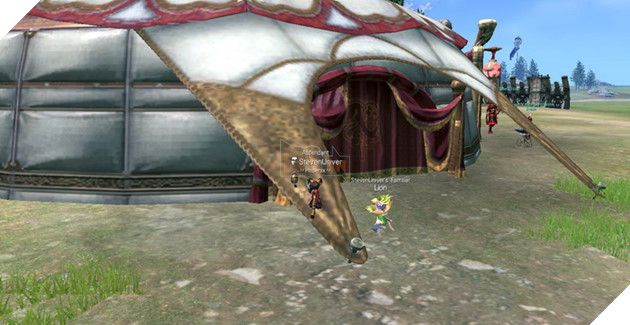 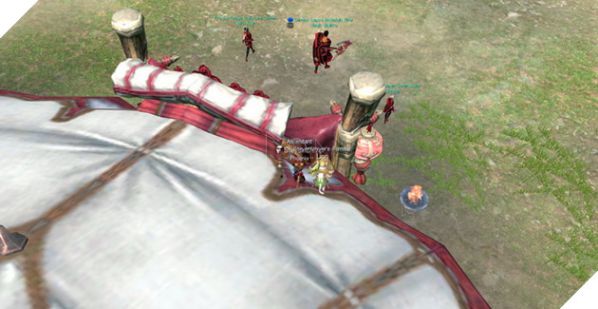 Here, you will see 2 guards with the “boss” sitting in the middle seat. Your task is to lure 2 soldiers away for another person to take the quest at that table. Note: The lure should have effect + damage resistance in time to avoid taking 1 hit with too high damage and then die immediately. 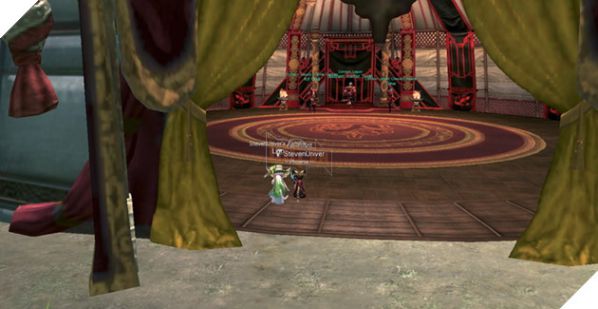 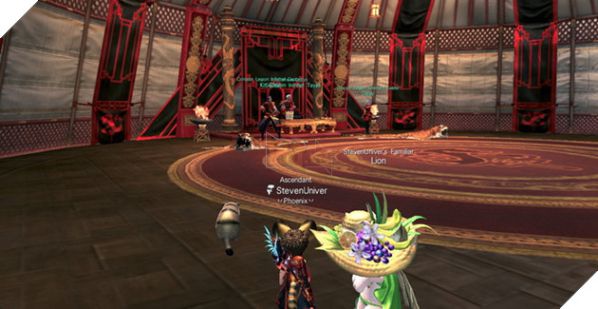 This task should pull the whole team of 6 people so that 1 person can be enjoyed by everyone … When completed, please Esc> Escape to avoid time to run back (escaping will lose all Spirit points)

Destroying the Chief Elder of the XX Clade

For this mission, you just need to destroy the target to complete the mission right away, no need to receive it anywhere. Your main target will be the boss guarding the gate right in front of the opposition’s main tent (as mentioned above).
You should not hit right in front of the tent gate because it is easy to drag other surrounding monsters into the lagoon. What you need to do is find a main tank for the party and pull him to the top of the tent (go from the tent to the top) and hit him in front of the roof (if you go too far, the boss resets).
In addition, this boss hunting should call the entire state in the server to fight together (20 people or more). Simple to hit faster and also have to deal with the enemy if they want to destroy …

This task is quite simple, during the preparation or Occupation, your faction NPC will be scattered in this area. Come close to interact with them and shield straight back to the barracks where your grandmother accepted the mission to complete the quest.
Of course I’m just going to be beaten while walking … 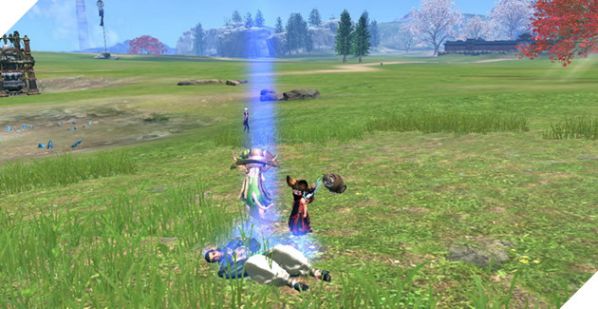 The quest to pick up meteors

This task is also simple and does not require advance recognition. On the side of your area during the preparation or Occupation phase, meteors (hot rock) will sometimes fall here (near the sandbox with a weapon box). Your task is to bring this meteorite to the place where she returns the mission to complete. 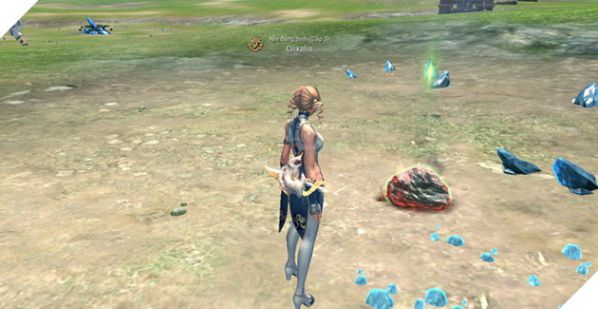 Note that when you bring the stone, you will receive about 2000 damage per second, so drink your blood and run back. When placing the stone down, it will not disappear, but may be taken by other players, please pay attention to this feature. 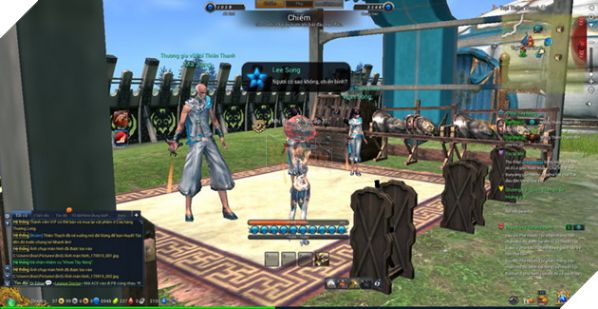 In addition, the first time doing this quest, you will get 10 more achievement points.

Other details to note in Dong Linh Thach

Near the merchants’ quarters, you will see 3 drums from small to large. Buffs are not specified in the VN server, but they will help you counter the debuff of big bosses. Kinds of big bosses (the late stage 3 boss or the boss deep inside the barracks) will have a damage counter buff with an effect (X). When the stack reaches 10 stacks (X), you will die instantly without being able to revive, only reviving from other players. 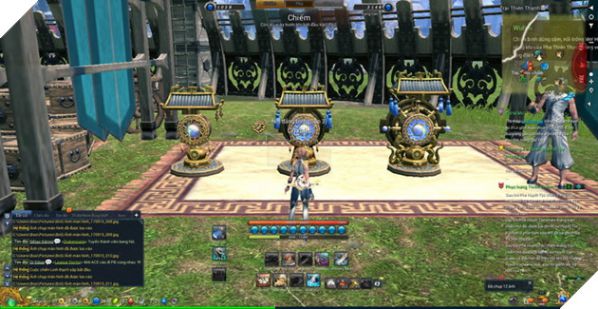 At the faction merchant, you will be able to purchase amulets that increase the stats obtained by the Spirit (200% or 300%) – buy with gold or a Spirit. However, currently the Vietnamese server has not opened the item for sale in the faction shop, so we will not be x2 x3 temporarily …

Above is how the operation and tasks at Dong Linh Thach in the pc game or Blade & Soul, hope to be necessary for gamers.